Why Start A Business in Illinois, Anyway? 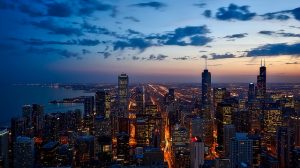 Quick – what’s the first startup that comes to mind when I mention Chicago? If Groupon immediately popped into your head, you aren’t alone. The Chicago-based startup’s meteoric rise to fame (and subsequent fall from grace) has long defined Chicago’s startup scene – and the startup scene of Illinois as a whole. As you may have surmised, that’s not a good thing.

The idea, traditionally, is a hard yes. Just look at any city that’s played host to a major enterprise like Google, Apple, or Microsoft. Torrents of money pour into the startup ecosystem. Entrepreneurs from all over the world flock in, hoping to work side by side with one of the greats.

So why didn’t that happen with Groupon? Was it because the company eventually failed? Or is there something else to this?

“I don’t think there has been a lot of capital that has flooded into Chicago through the Groupon exit,”  says Howerton. “You think about the success of a company like Microsoft and the early days of Microsoft in Seattle. It was not that 10 guys got wealthy but hundreds and hundreds of people became millionaires. We haven’t yet seen that from Groupon. In some ways, it’s not a tech company. You just don’t have hundreds of engineers who made a million dollars.”

Yikes. We’re not exactly making a strong case in favor of Illinois, are we? Let’s refocus a bit.

It’s true that Chicago’s startup scene is flagging. It’s also true that people on both sides – entrepreneurs and investors – blame the people across the field from them. Entrepreneurs say there’s not enough money, and that investors are too risk-averse; investors say there aren’t enough proven entrepreneurs with credible, viable ideas.

There’s actually quite a bit of wealth in Chicago. Quite a bit of money spread amongst wealthy investors. If you manage to tap into that wealth, your startup could very easily be the business that revitalizes the city – and replaces Groupon as the big one.

“There’s a lot of upside potential [in Illinois],” explains Morgan Stanley Senior Vice President Steven Esposito. “Chicago is a big city with a lot of worth. We’re missing a lot of opportunities.”

Why not take a leap of faith and try to seize that opportunity? My Company Works will even help you along in that regard. We’ve helped countless organizations just like yours take their ideas from concept to concrete – maybe we can help you be the next big thing.

This entry was posted on Thursday, December 28th, 2017 at 12:32 pm and is filed under Starting A Business. You can follow any responses to this entry through the RSS 2.0 feed. You can skip to the end and leave a response. Pinging is currently not allowed.