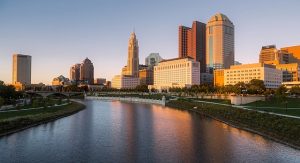 Six years ago, a startup company was purchased in Ohio for $100 million, according to venture capitalist Mark Kvamme. Everyone involved in the deal was excited about it at the time – but they also acknowledged that it wasn’t likely to put a whole lot of money back into the State’s startup community. And that’s something Ohio desperately needed.

Even today, Ohio is still amongst the states feeling the crushing impact of changes in America’s manufacturing core. Eight out of ten cities in the state have been deemed ‘economically distressed.’ And its economic recovery has been slow enough that it’s actually causing issues elsewhere in the country.

Given all these issues, why would you want to start a business here? Why would anyone? Simple – the present and past may both be a little grim, but the future is brighter than ever.

We are moving rapidly towards the era of the connected car – and a revitalization of the automotive industry comes hand in hand with that. Ohio and several other midwestern states are seizing upon the opportunities this technology represents, and experiencing downright meteoric growth as a result.

In short, in spite of the economic foibles of the State, Ohio’s startup ecosystem has the potential to be remarkably strong, even if it is somewhat small and fragmented at the moment. Those businesses that manage to get in and secure funding now will be well-positioned when the boom actually happens.

And make no mistake, it will happen.  A lack of local talent, risk-averse investors, and a small, fractured community; these are temporary setbacks. And they’re slowly fading.

“The entire Midwest is growing, but Ohio is emerging as a leader,”Falon Donohue, CEO of VentureOhio explained in an interview with The Columbus Dispatch. “I don’t know if you can pinpoint one reason, but we’ve seen certain milestone events — winning the Smart City competition, CoverMyMeds (a $1.1 billion purchase), (venture-capital firm) Drive Capital moving here — and the seeds planted a long time ago have started to flourish. This is a large ecosystem, and it’s growing fast.”

In short, Ohio could well become an economic leader at some point in the next decade or two. And any startups that get involved now will get a piece of the pie. Why not ensure yours is one of them?

We can even help you along in that regard. My Company Works has helped countless startups just like yours get on their feet. We’ve even created a one-stop page to tell you everything you need about starting a business in Ohio – check it out here.

This entry was posted on Friday, December 29th, 2017 at 12:36 pm and is filed under Starting A Business. You can follow any responses to this entry through the RSS 2.0 feed. You can skip to the end and leave a response. Pinging is currently not allowed.